The “absurd” we can be, the better

“If an idea, at first, is not ABSURD there is no hope for it” – Albert Einstein.

The above photo is of Bosbul (Village bull) sired heifer belonging to my brother, Wessel, due to calve at 18 months of age.
The below photos are of a Composite (Mashona / Angus) cow (3rd calf since 22 months of age) and her current calf bred by John Haymaker of Oklahoma.

According to current thinking it is ABSURD to use bulls with no performance figures (particularly one rescued from slaughter) or to use an “unimproved” African breed to improve the highly “improved” American Angus (considered the best beef breed in the world). For me the question is not whether we need better genotypes for these respective environments, but how to speedily multiply them.

The more ABSURD we can be the better:

Should we produce what the consumer wants?

The statement has always been made that we should produce what the “consumer wants”.

We need to be LEADERS and not POLITICIANS.  We need to tell consumers the TRUTH and not LIES.

“Experts” are destroying the good attributes of Uys cattle.

I have made it clear on many occasions that the selection criteria being used by the Bonsmara Society (in particular Phase C growth and FCE) and now being followed by other breeds is NEGATIVE:

Getting serious about improving fertility via breeding.

Pictured above is a 27 month old Mashona / Angus bull bred by Rancho Carretas, Mexico.  He was identified (observation) as the most virile yearling Mashona / Angus bull out of a group used for multi-siring last year. Semen has just been collected from him in preparation of inseminating similar genotype heifers and cows.

There is both SCIENCE (organised common sense) and ART (“reading” nature correctly) involved in cattle breeding.

This is the ONLY appropriate role for cattle breeders.

How does one graze the “top third”?

If the goal is “maximum sustainable profit / ha” there are only two options in terms of grazing: Either we selectively graze the “top third”

Or we non-selectively graze and flatten the ground in order to achieve 100% harvest efficiency.

There are grazing management advisers that recommend ranchers to graze “lightly” or “take the top third.”  This is IMPOSSIBLE in multi-species pastures.  Cattle will, if allowed (low stock density), graze grasses selectively in accordance with their preference.  They may utilise a third of the available material, but they will not evenly graze a third of each individual grass. The result of grazing selectively is poor utilisation (lower stocking rate) and negative species composition changes. There will also be a poorer cycling of nutrients as well as poorer solar energy conversion.

The human mind is an enigma.  It is amazing how we become brainwashed.  The recommendation to “only graze the top third” is a case in point.

A lie never becomes the truth because everyone believes it.

“The height of stupidity is doing the same thing over again and expecting a different result” – Albert Einstein.

“Science is nothing but organised common sense” – Thomas Huxley.

When it’s not about the truth but about us then we have a problem.

Nature is extremely complex, but also very simple to understand. Both, the problem and the solution, lie with our ego.

In nature one plus one does not equal two. Studying detail can lead to confusion.
Rather observe and understand the whole.

Learning more about less can lead to knowing everything about nothing.

The biggest danger to cattle breeding is a “scientist” with a scale, tape measure and computer.

When we substitute our God given powers of observation for figures we have a problem.

In “modern scientific breeding” (conventional performance testing) we are attempting to change cattle (ruminants) into inefficient pigs. At best, we are producing cattle that require improved nutrition (selective grazing; feed out of a bag) in order to be “productive”.

It is the height of ignorance and arrogance to blindly believe that Stud cattle are superior to Village cattle.

Cattle have a dual role. They have to efficiently convert grass into beef and they have to improve the land on which they graze.

The only appropriate role a breeder has is to accelerate natural selection.

Ol Pejeta Consevancy in Kenya 🇰🇪 is a pioneer in wildlife,cattle,and tourism.
Imagine running cattle on a property that is also home to 70 lions hyena and of course the elephant rhino etc.
The game love the short grass left behind the cattle and the portable night bomas leave manure which star grass thrives on.

Diversity of all life is essential.
We are unique in Africa when it comes to mammal diversity.
We must integrate livestock and wildlife.
Cattle ranchers need to incorporate wildlife.
Game ranchers MUST incorporate cattle in order to improve the ecosystem processes.

“Ol Pejeta grazing policy is that the Boran herd is used as a tool in the Conservancy to maintain quality grazing conditions for all animals, wildlife included.”

Lion proof kraal that is put up each night after grazing 7,000 cattle, moving them across the land

What is a good beef animal?

All that remains is to accelerate natural selection.
This is the only appropriate role a true breeder has.

Video of Presentation From 2017

How incredibly valuable is this hour of instruction…and it’s free. Thanks Mr Johann 🙂 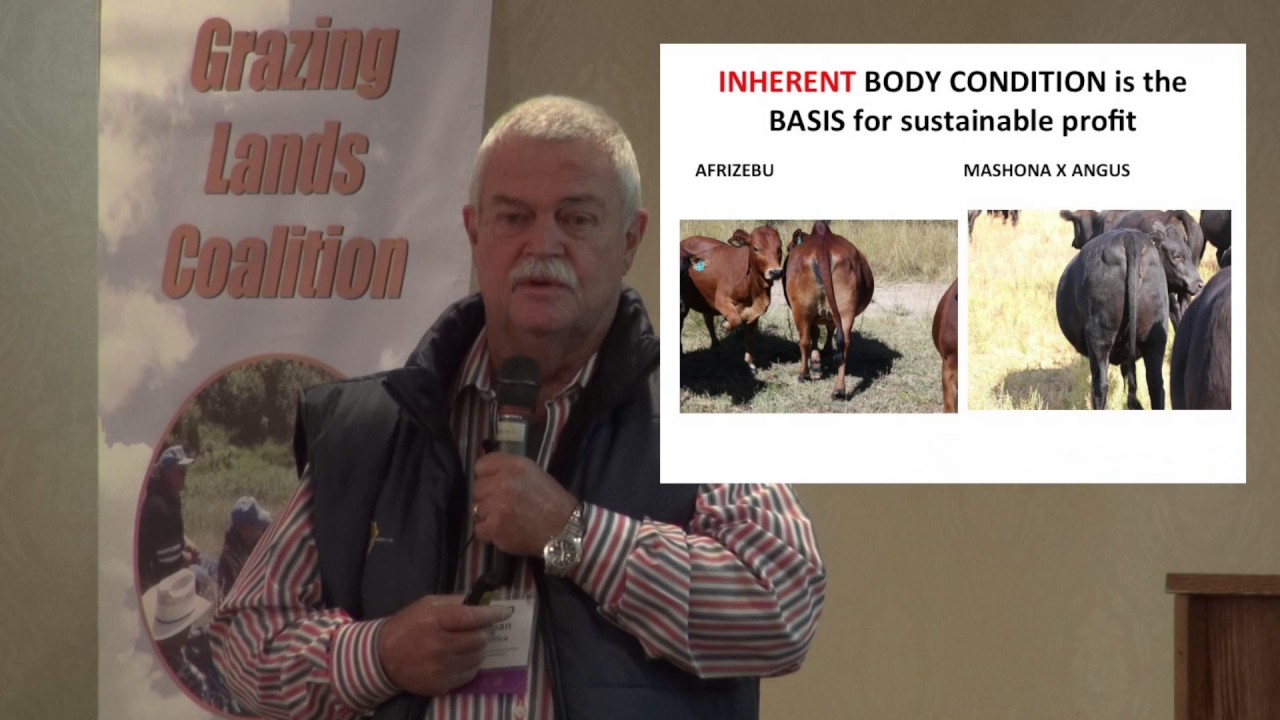 Cattle breeding requires a REVOLUTION similar to what is being achieved worldwide with UHDG.

Conventional Stud Breeding hiding behind “pedigrees” is OBSOLETE. Even the village dog has a pedigree.

“SCIENTIFIC” breeding obsessed with computer generated BREEDING VALUES results in, at best, cattle that can be “productive” if fed enough.

Let’s get back to using our God given powers of OBSERVATION in order to make COMMON SENSE decisions.

No official PEDIGREE.
No registration PAPERS.
BUT a live calf on the ground before the age of 2 years.